I have always loved traveling to Panama. It seemed to have a perfect blend of wilderness, urban and island areas. Most of our goods would have cost a lot more had it not been for Panama, and many areas seem to be trapped in a kind of weather distortion. Panama is a big deal in Central America. It’s a crossroads of America – where the North meets the South, which is interesting, there are two giant oceans; The Pacific and the Atlantic converge. The Panama Canal is a magnet for tourism and a fiscal place through which the cargo moving north and south passes.

Panama it is economically very advanced and has modernized its infrastructure compared to neighboring countries, which facilitates transportation in the region while tourists rest with ease across the Island.

We single out the best destinations you should visit while vacationing in Panama. Travel slowly because you will be on the move most of the time. The islands are simply magnificent. The beaches are pristine, and the views from the ocean are quite heavenly. You will never want to leave Panama when you step into the central city.

Panama is diverse and vibrant metropolis in Central America. It is the gateway to regional trade, connecting North and South America. The resulting cultural mix has made the city a flexible and dynamic, acceptable hub for visitors having fun either for work or pleasure. When you arrive in Panama, don’t be fooled by the quiet, calm water. The city is highly urbanized with skyscrapers, unhindered traffic and rows of endless casinos and nightclubs stacked together.

The former colonial peninsula of Casco Viejo has become a tropical getaway destination where thousands of tourists flock each year.

A few miles from City of Panama is Metropolitan Natural Park (Metropolitan Nature Park); easily accessible by road, it is the perfect place for hiking. Most of the Park’s terrain is dry lowlands, a rare occurrence in Central America, which has been largely contributed to by extreme deforestation to create space for urbanization. Nonetheless, there is much more to see in the wooded park – home to hundreds of diverse trees and thousands of animal species, including birds and Geoffroy’s tamarins.

The park has five trails that cover approximately 5 kilometers. The trails offer stunning views of Panama City, an observation area overlooking the bay and downtown, and additional trails that lead deep into the woods.

To book a guided tour, you must schedule an English-speaking guide in advance to secure a place.

Take a walk along the trails and discover the stunning scenery and see the exotic wildlife.

The city of Panama has a huge jungle in the heart of the city – the only city in the world with a forest.

The Panama Canal is an artificial watercourse of 50 kilometers that connects the Pacific and Atlantic Oceans. The canal passes through Panama, a narrow canal in Central America. It was a colossal engineering project to keep Gatun – an artificial lake between the oceans – to reduce mining projects.

Lake Gatun was formed by the Chagres River between the oceans at 85 meters above sea level to raise ships passing through the oceans and the lake. In other words, locks help extend large ships as they move inland from interconnected oceans.

Once the ship passes in the locks, the massive door closes and the container is filled with water (by gravity) until the ship moves high up to the next lock.

The channel has three locks at each end. It takes a staggering 11 hours for a large ship to pass through the locks. Now this is the excitement of watching ships do their thing. It’s a tedious process to watch, but worth the wait (at least for smaller boats). 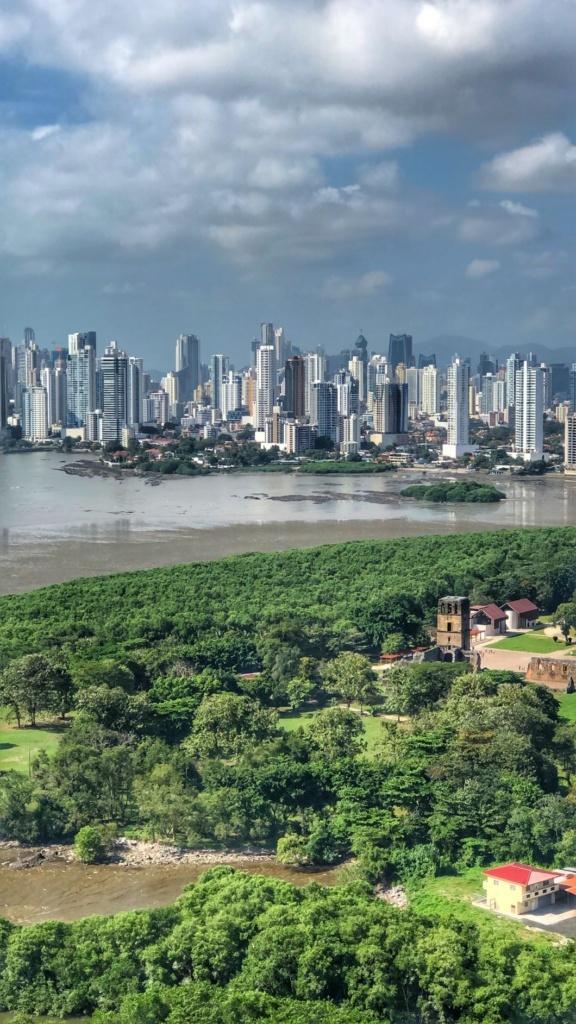 Panama Viejo (Old Panama) with New Panama in the distance.

Old Town is undoubtedly amazing. It is a less visited region, which has a rich history of the peoples and culture of the Central American peoples. It was a crucial Spanish trading city throughout the Central Pacific coast. Captain Henry Morgan discovered the oversized island of Panama and destroyed it in the 17th century.

Today, the remains of the remains still cover a significant part of the ground with the remains of old buildings such as the cathedral, smaller churches, including monasteries. There is a glimmer of ancient stones on the streets, and you can feel the ancient vibrations of the ruins as you walk through these well-maintained ruins.

Explore archeological sites like the ancient Panamanian cathedral, climb the bell tower and take a stunning view of the city of Panama from the air.

The Amador Causeway it is an impressive promenade that captivates both locals and tourists who enjoy a holiday in Panama.

Roads are littered with tall, elegant palm trees, magnificent views of the Panama Canal, and the glittering skyline of Panama City; on a long bridge connecting America and the Gulf of Panama.

The Panama Canal is about 3 kilometers long part that connects the three islands that make up the Amador Road.

It is the main tourist attraction in Panama.

The American government built the Canal in 1913. It is a unique embankment because it connects Panama City with four islands in the region – serving both as a road and sidewalk for pedestrians crossing between the four Islands, which are:

Of course, there are fantastic cafes and shops for snacking. The most desirable mode of transportation used by the locals is cycling. You can rent one that you will cross together with the islands as you pass through the beautiful landscape, i.e. Panama City by the aisle.

Pearl Islands discovered by Spanish explorers in the 16th century and named by Vasco Nuñez de Balboa after excavating large pearls scattered off the coast of the island. In the true sense, Balboa did not enter the interior of the village. However, other researchers have done the same, killing many locals in the process of picking pearls.

It is the perfect escape destination if you want to spend quality time with a loved one on beautiful secluded beaches. Activities on the island include scuba diving, snorkeling and fishing, so it is a wonderful place to explore and relax in the evening while watching the stunning view of the sunset.

The Pearl Islands are an archipelago, but only some of the smaller islands are habitable. One of those islands is

Contadora Island has social benefits and can receive tourists at any time of the year. It is only a twenty minute flight or two hours of a chartered boat from the city of Panama.

Contadora is a small town with villagers living a simple life – the locals manage with golf carts or legs. The island is only 0.5 square kilometers away, so all the facilities are at your fingertips, from shops to cafes and boarding houses.

Contadora Island is an inhabitable island with three islands in the Pearl Archipelago. It has luxury resorts, an airport runway and rented private yachts cruising the beautiful sky-blue waters while exploring the islands.

The island of San José

Island of San José, the second largest island in the archipelago, is a private island of 17 square kilometers with a luxury resort and beautiful exotic islands. It is excellent, with fantastic beaches and lush fresh forests. Traveling to this secluded island means that you spend your vacation in a peaceful environment. It is the perfect place to meditate, enjoy the company of each other (for couples) and enjoy all the excesses of life that the island of San Jose offers. 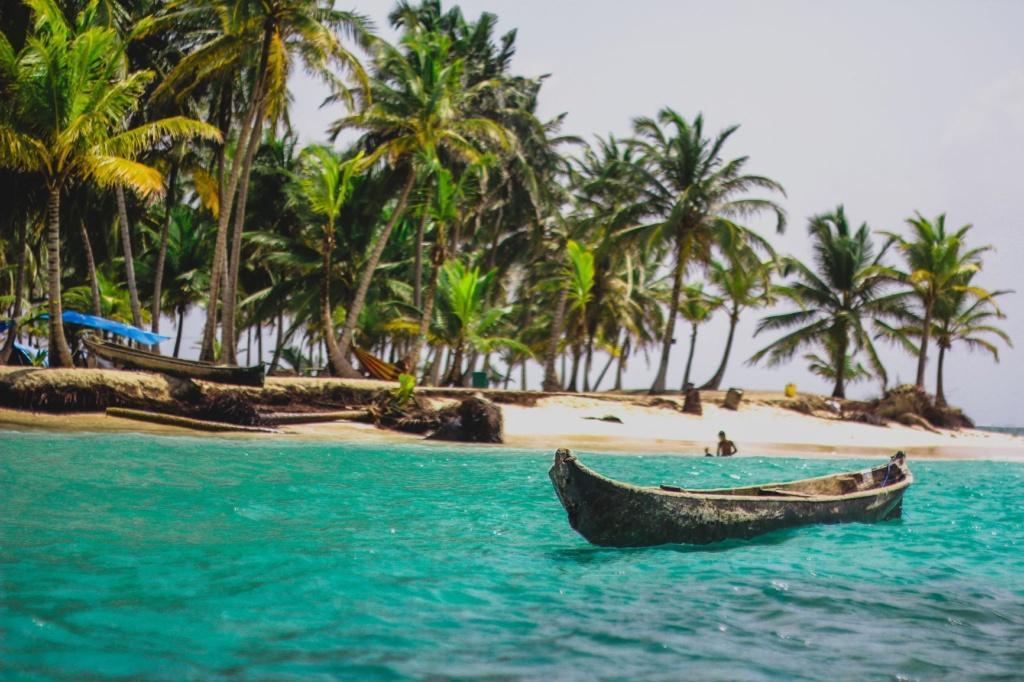 Head to the San Blas Islands and fight back, have a drink and just watch the world go by.

Most holidays in Panama revolve around the ocean, beach activities, underwater adventures and lots of sunbathing – just like in the Caribbean. But when visiting Panama, expect less with the extravagance of locations, and more culture and simplicity of life. You’ll spend a little money, yes, but go with an open mind.

San Blas Islands is east of Panama, inhabited by the Kuna tribe who own and manage activities on the Island. They are welcome to visitors and, for a small fee, allow travelers to access the islands for a day or two, depending on your travel route.

Calm sea and San Blas they are perfect for sailing, scuba diving and deep sea diving. You can also sign up for one of the top resorts for a peaceful holiday, filled with over-indulgence, enjoy the best Panamanian cuisine and enjoy the great sunsets while relaxing on the private beaches.

The best decision you will ever make is to visit these small island sanctuaries in Panama. Now Colon Island has one town, the perfect little town in the Bocas Del Toro archipelago – Colon Island.

Welcome to the city of Bocas.

Everything is at your fingertips: excellent resorts, cozy seaside restaurants and souvenir shops. To crown the simplicity of life, to feel the natural splendor of the Island, visit the Finca Los Monos Botanical Garden to relax while experiencing the peace and ambiance of these lush gardens. Stroll along with Playa Estrella as you take lots of photos to share with friends and family.

Next, you can visit the Dolphin Reserve in its natural habitat right off the coast. Rent a boat and sail slowly towards the calm sea as you watch the Dolphins enjoy themselves as they gush merrily through the waters. You can also opt for scuba diving or deep sea fishing, and later enjoy a sumptuous fish meal while relaxing in one of the resorts in Bocas.

Bastimentos Island is among the Bocas Del Toro archipelago. It is a serene and beautiful island, an untouched gem with vast virgin lands, unmarked roads and hiking trails. Explore the spacious sandy beaches ideal for free surfing, swimming and kayaking along the rustic wavy waters of Wizard Beach. Visitors prefer to go to Red Frog Beach, where there is a lot of life, cafes and beaches with gourmet restaurants selling all kinds of snacks. The island has one small town, the Old Town on the coast, with rustic structures and a relaxed atmosphere, with a few local villagers.

Coiba Island is located in the province of Veraguas, south of Panama. It includes the smaller islands that make up the largest island in Central America. The whole island is a reserved area that is currently called Coiba National Marine Park. Its nickname is Devil’s Island, because it once served as a colony in the middle of the century, giving it the nickname Devil’s Island, allowing many natural resources to remain intact for a long time.

To enjoy your tour, plan a day trip to the Island and book a water sea tour, diving trips or exploring the mainland. Watch out for exotic species of birds, monkeys and iguanas. Coiba Marine Park is recognized as UNESCO World Heritage Site location in 2005, which boasts some of the best marine and tropical diversity in Central America.

Coiba is a favorite place for scuba diving water sports on the largest reef in the region; the Bahia Damas ridge, on the west coast.

Diving enthusiasts have the opportunity to see sharks, whales and manta rays. The best time to catch whale sharks in action is between December and April. You will never have enough of this heavenly refuge between the Americas. Tell us your experiences in Panama.

Panama is the realization of the dreams of ocean lovers. Island jumping is a way of life with something for everyone. I just like to fight back and relax. Others like to dive and dive. Everything you want to do on the water is waiting for you in Panama.